Having already dispelled my original pre-conceptions of reasonably-priced pocket walking books, the next in the Top 10 Walks series from Northern Eye Books is most welcome dropping on the doormat. 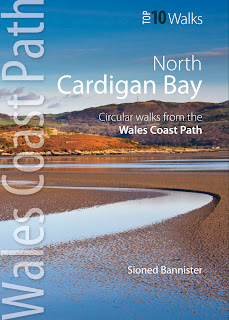 “If it ain't broke, don't fix it” is that well-worn adage, and it is certainly true with the format of this books.  Bright and colourful, with a good number of excellent photographs and a modern, airy feel to the design is what the Top 10 Walks series is all about.  Have a look at my review of Pub Walks: Walks to Cumbria's Best Pubs.

This book is part of a growing sub-series focused on circular walks along different parts of the Wales Coast Path.  The Path opened in May 2012 – here’s our podcast with a feature about the opening – and stretches 870 miles from the outskirts of Chester in the north to Chepstow in the south.  Great play was made in the path’s first year of Wales being “the only country in the world with a path around its entire coast” – and indeed this book mentions this too.  The PR guys at the time seemingly forgot about the Isle of Man having the Raad ny Foillan coast path since 1986…  I’ll forgive the book including this line, as it was generally used at the time, but it’s interesting to note the official PR line now is “the longest continuous coastal path around a country.” – which is perfectly true. 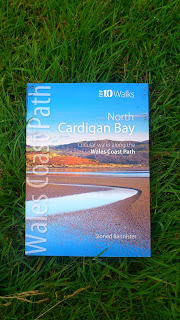 This particular book is focused on the north part of Cardigan Bay and feature 10 walks which include a section along the Wales Coast Path and then via off to take in a special place, and then return back to the start.  Who better to choose 10 top walks in the area than Sioned Bannister.  Sioned hails from these parts, and has picked a collection of varied and interesting walks from the coast path, from Porthmadog in the north of the area to Borth in the south.

All of the walks have a shout to be included in the book, but I have a couple of particular favourites.

First is the Porthmadog route to summit of the hill which dominates the port – Moel-y-Gest.  Porthmadog is very familiar to me as it was one of the places we used to visit on the annual family holiday to North Wales when I was a child.  It’s also a place to go now as a mid point of two spectacular narrow gauge steam railways – so there’s lots of reasons to visit.  From the summit, the walk offers a fantastic view of the port of Porthmadog – named after William Alexander Madocks and his attempt to command the route between the newly joined capital cities of London and Dublin in the early 1800s. 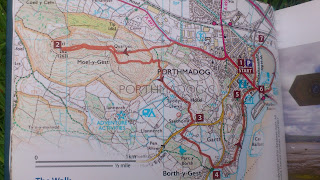 The second of my favourite walks in the book is actually from Porthmadog again… but this time to the Italianate village of Portmeirion, the brainchild of Welsh architect Clough Williams-Ellis.


My last favourite from the book is the walk from Borth and along the Cardigan Bay part of the coast path and back into farmland for a contrast.  This is particular of interest as at low tide the remains of an ancient submerged forest is revealed.  This is from the ancient kingdom known locally as Cantre’r Gwaelod – which some of your “Coast” fanatics will remember for the 4th programme of the very first series.

10 walks in a bright, colourful and detailed book – complete with proper OS mapping which means you don't really need a separate map – all for £4.99.  It’s a real bargain, and although you can buy apps for your smartphone for less, they don't really have the detailed route descriptions or the beautiful photography this book does.

If you're in the market for 10 short walks in the Cardigan Bay area, then this is the book for you.

A guide to buying walking boots

As well as being a rewarding and enjoyable hobby, walking is a fantastic form of exercise.  It allows you to set your own pace and build up your fitness and stamina over time, often in beautiful surroundings.  To find out more about how beneficial walking is for your health, and to get some great advice on building your general fitness by walking and hiking, take a look at this handy guide. 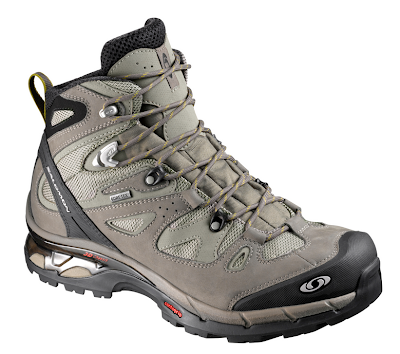 Like all forms of exercise, walking and rambling is going to put pressure on the different parts of the body, particularly your feet and lower legs muscles.  That’s why it’s of the utmost importance that you take your time when you’re choosing walking boots, to ensure that you're wearing something that’s suitable for walking long distances or over difficult terrain.

Here's a few things you should be looking for in a pair of walking boots to ensure that you stay safe, healthy and comfortable on your walking adventures. 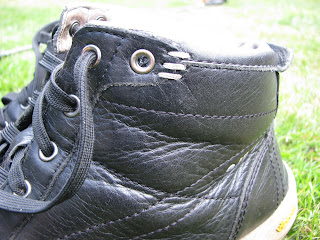 Walking can take you on all sorts of surfaces and terrain, which naturally puts more strain on your feet than walking on surfaces like concrete or asphalt.  It’s because of this difficult terrain that your everyday shoes and trainers just aren't suitable.

When choosing boots, your buzzword should be 'support'.  After all, the reason you're wearing walking boots is to support and protect your feet.  Look for a design that’s high enough to support your ankle, as well as one that incorporates a protective rubber toe and heel-cap.  When you're walking, your heel takes the brunt of each step you make; having sufficient padding in the heel area is important for reducing the risk of injury.

The best walking boots use foam in their design for added support, so pay attention to product descriptions when you're buying boots, to see if they have this essential feature.

As you're walking, friction and the heat released by your muscles can cause the temperature inside your walking boots to quickly build up.  You should choose boots that are made using materials like split suede leather, which prevent an excessive build-up of heat, and are waterproof.

Again, you should pay close attention to product descriptions and particularly look for boots that boast 'thermoregulation' technology; a feature that allows heat to escape. 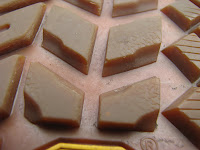 You are reliant on your boots to provide adequate grip to the surface you're walking on.  Opt for a boot design with a treaded sole, made from an adhesive material like rubber or EVA, for optimum grip.  You should avoid designs with plastic or PVC soles, which are will be unstable when you're walking.

Obviously, a pair of walking boots aren't going to be the lightest footwear that you own.  However, you should do your best to look for boots that boast a lightweight design.  Having boots that are heavy and cumbersome will reduce your walking capabilities and the distance you can cover. 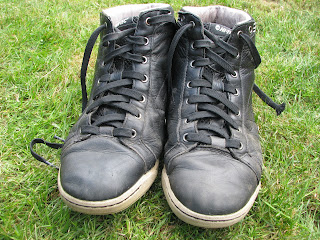 Use this guide as much as possible when you're choosing your walking boots, to ensure that you select a product that’s suitable for your chosen pursuit.  Millet Sports have a decent range of walking boots and hiking shoes, which includes all of the big brands like Merrel, Brasher and Salamon.

Remember to check the product descriptions of boots to ensure that the features you are looking for have been incorporated into the design.  If you do this, you shouldn't go far wrong with your choice.

Posted by Unknown at 10:54 0 comments
Email ThisBlogThis!Share to TwitterShare to FacebookShare to Pinterest
Links to this post
Labels: Walking, Walking Gear

Top 5 Walks on the Isle of Wight

If you're looking for walking holiday destination with downland walks boasting views over rolling countryside, coastal rambles along wild primeval beaches, wetland estuaries full of wildfowl and woodlands bursting lush greenery and wildlife, then look no further than the Isle of Wight. 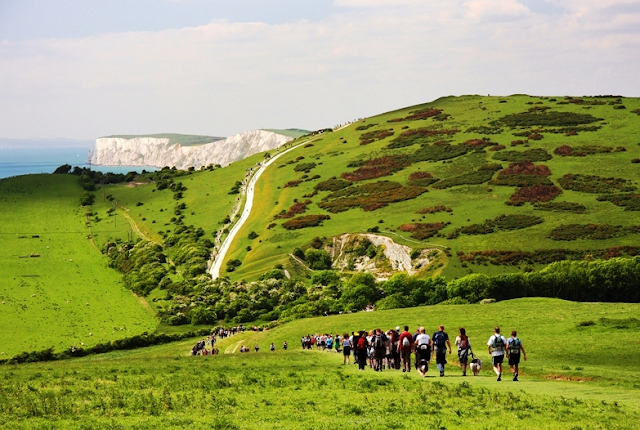 With over half of the Island designated AONB (Area of Outstanding Natural Beauty) and 500 miles of well-maintained and signposted footpaths, the Isle of Wight hosts two Walking Festivals each year, with specially designed walks to help you become acquainted with this 23 mile by 13 mile diamond-shaped gem only two hours away from London.

With so many different walks and trails to explore whilst visiting the Isle of Wight, here’s a shortlist of five of the best. 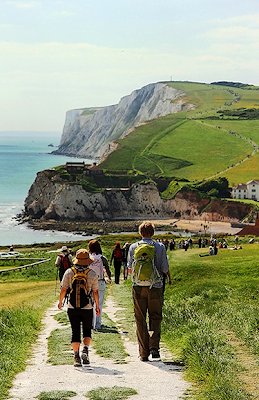 This is a great way to see the Isle of Wight and it covers a total of 67 miles, most of them along the cliff tops or clinging to the coast, although in places it has to detour inland – especially over the north-east coast to avoid the multi-tributaried Newtown Creek.  The whole coastal path can be walked in around 24 hours or you could split it into around six manageable daily walks of between eight and 14 miles.  And if you have kids and/or are intrigued by the Island's Jurassic past, then there's a new 'Dino Trail' along the southern coats that is well worth a visit.  Special 'rocks' have been sited along the coastline from Yaverland to the Needles that have QR codes within them for you to download an app to your smartphone.  Once downloaded the app will provide information on the Island’s Jurassic heritage and will also insert a lifelike life-size dinosaur into photographs you take at each location.  There's a different dinosaur at each of the seven rocks and they are representations of the real dinosaurs that have been found here and roamed this stretch of coastline between 200 and 145 million years ago. 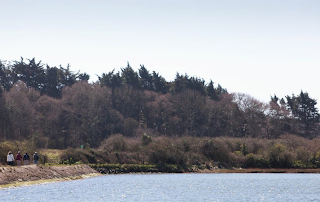 A chalk ridge runs through the centre of the Island from Culver in the east to the Needles in the west, cut only by river valleys.  One of the best walks on the Island is along the crest of this ridge and it is the route for the annual Walk the Wight to raise money for the local hospice.  Starting point at Bembridge Airport and the walk runs to the tip of the downs in the west, just before the Needles rock formations. 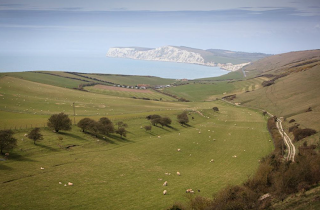 Another stunning walk across the Isle of Wight is the Stenbury Trail from Ventnor to Newport, taking in Stenbury and Appuldurcombe Downs, with far reaching views to across the Island and then dipping down into Godshill, the edge of the Arreton valley and along the Medina river into Newport. 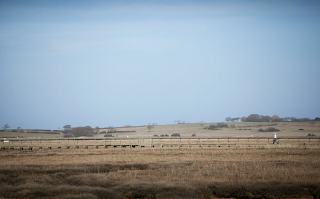 Perhaps you might like to cross the beautiful western side of the Island from the north to south coast, on the Hamstead Trail.  You set off from the coast between Yarmouth and Newtown, passing salt marshes and over downland to finish at the jurassic Brook beach with its fossilised forest and dinosaur footprints. 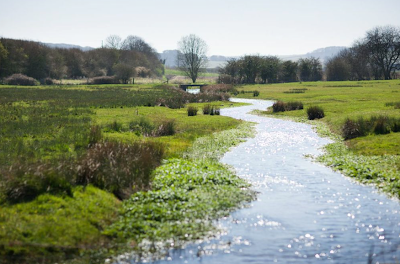 Shepherd's Trail
Shepherds Trail is a superb walk from Carisbrooke Priory, up and down the chalk downland that at this point stretches further south than at other places, and finishing at Shepherd's Chine at Atherfield.  A wild pebbled beach with rocky outcrops and a dangerous undertow, but superb for able swimmers.


There are plenty of amazing places to stay when visiting the Island and great pit stops to re-fuel whilst out walking too – to find out more checkout myisleofwight.com.  And getting to the Isle of Wight couldn't be easier, with Red Funnel Ferries running up to 49 ferry crossings daily from Southampton to Cowes.